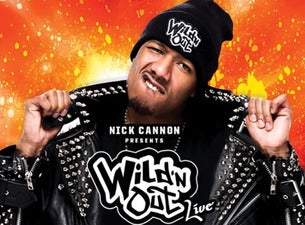 One of the comedy world's most hilarious and outrageous shows, Wild ‘N Out again escapes from TV screens to make its return to stages nationwide. Since the series debuted on MTV in 2005, Nick Cannon's raucous showcase has helped launch some of the biggest stars in comedy. Kevin Hart, JB Smoove and Katt Williams were just some of the young and hungry stand-ups who cut their teeth in the show's lightning-fast improv battles, "WildStyle" rap showdowns and all the other games that determined which of the week's comedy squads reigned supreme. Since the show returned in 2012, it has spotlighted a whole new generation of talented comedians who are just as eager to demonstrate what they can do. Performers recently featured on Wild ‘N Out — now on its own streaming channel on Pluto TV — join America's favorite MC for a live presentation that's every bit as bold, fearless and funny as viewers will expect. Performances are recorded in Atlanta for the show's next season.

A hilarious comedy showcase packed with hip-hop style, energy and attitude, Nick Cannon Presents: Wild ‘N Out has been a proving ground for rising talents ever since its MTV debut in 2005. The series was created by Nick Cannon, the actor, singer and rapper who first showed off his own stand-up skills on his father's cable access TV show in San Diego. Kevin Hart, JB Smoove and Katt Williams were among the future stars joining their host and fellow comedian in the weekly battles between squads as they competed against each other. They positively slayed viewers in games that demonstrated their improv skills. Competitors would do and say whatever it took to claim victory in the "WildStyle" rap showdowns and other rapid-fire events. Since the series' return from a six-year hiatus in 2012, Wild ‘N Out has not only established itself as a comedy TV institution but a live event that's every bit as outrageous as the action on screen.