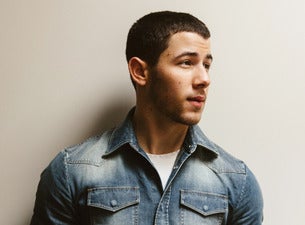 For more than a decade, pop rock crooner Nick Jonas has been making fans swoon with his soaring falsetto and charismatic stage presence. But 2014 was a turning point in the young singer-songwriter's career, as he abandoned the teen pop tinsel of his Jonas Brothers fame to expose an edgier, more mature side to his music. As a solo artist he boasts a gritty repertoire of songs about sex, jealousy, and love all perfectly accented with catchy hooks, R&B influences, and slick dub beats that'll have fans bobbing their heads the entire time. With his fresh material and new direction, Jonas treats fans to an unforgettable concert experience packed with raw talent and charisma.

Dallas-born singer and actor Nick Jonas kicked off his entertainment career on Broadway at age seven, starring in high-profile productions including Les Misérables and Beauty And The Beast. At age 12 he penned a deal with Columbia Records and released one album, 2004's Nicholas Jonas. In the mid-'00s he rose to superstardom alongside his two older siblings, Joe and Kevin, as a member of the pop band The Jonas Brothers. The group released four studio albums and became a worldwide teen phenomenon before calling it quits in 2013. Since 2010 Jonas has focused primarily on his solo career, beginning with his debut album, Who I Am, which featured backing band The Administration and introduced his fans to a harder, guitar-driven sound. Over the next few years Jonas built up an impressive resume as an actor and as the musical director of Demi Lovato's Neon Lights Tour. In 2014 he announced a brand-new album and released singles "Chains" and "Jealous". The fresh material translates perfectly to his exhilarating live shows, where Jonas continues to prove he's a talented performer with serious musical chops.