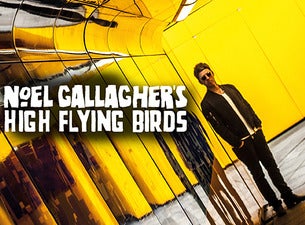 As a founding member of one of the biggest and best British bands ever, Noel Gallagher has been hugely influential in shaping the course of British rock'n'roll. Oasis had a total of eight No. 1 singles in the UK as well as eight No. 1 albums. Gallagher also had a No. 1 single with “Setting Sun” in collaboration with The Chemical Brothers in 1996.

Since Oasis split up for good in 2009, he has taken more of a back-seat role in the UK music scene but has continued to be successful with his new band, Noel Gallagher's High Flying Birds.

Oasis were very heavily influenced by several 1960s bands, such as The Beatles and The Who, and Noel managed to intelligently combine these influences to create a brand new sound that would come to dominate Brit Pop in the 1990s. Their first album, Definitely Maybe, which was released in 1994, became Britain's fastest-selling debut album ever and went to No. 1 in the UK and Irish album charts. Oasis were now on a roll and their second album, What's the Story Morning Glory, was released just over a year later. Morning Glory was a huge global success, spawning the singles “Don't Look Back in Anger,” “Wonderwall,” “Some Might Say” and “Champagne Supernova,” all of which were written solely by Noel.

Between 1997 and 2010, Oasis went on to have six more acclaimed albums with Be Here Now, Standing on the Shoulders of Giants, Heathen Chemistry, Don't Believe the Truth, Dig Out Your Soul and the compilation, Time Flies: 1994-2009. Over the years, Noel and his brother Liam were notorious for their feuding, and in 2009 they disbanded Oasis permanently. Liam formed Beady Eye with the rest of Oasis and Noel formed a brand new band, his High Flying Birds. Their eponymous debut album appeared in 2011.

Noel also regularly appears on stage with Kasabian, a band that he influenced hugely during the 1990s. Although it is generally accepted that Noel and Liam could never work together again, the brothers have a huge and loyal following, and rumors continue to circulate concerning a possible reunion. Should they ever decide to put the original Oasis line-up back on stage together, it would certainly be one of the most anticipated gigs ever.