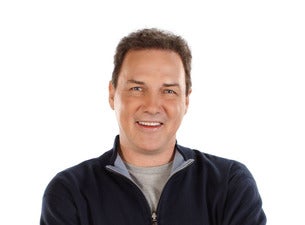 Born Norman Gene MacDonald on October 17, 1963, in Quebec City, Canada, Norm MacDonald got his big break at the 1987 Just for Laughs Comedy Festival in Montreal. MacDonald took his act to the States, where he wrote for ``Roseanne'' and ``The Dennis Miller Show'' before joining the ``Saturday Night Live'' writing staff in 1993. Soon after, Lorne Michaels gave him an on-air shot reading quirky Weekend Update editorials; within a year, he'd replaced Kevin Nealon in the anchor chair until he left the show in March 1998.
In 1998, Norm's first movie, the cult classic "Dirty Work," came out to theatres. In March 1999, Norm tried his hand at a sitcom he created with Bruce Helford. "Norm" lasted 3 seasons on ABC. During its run, Norm starred in "Screwed," which was also panned by critics. In October 2003, Norm joined forces with Barry Kemp, the man behind "Newhart" and "Coach." "A Minute with Stan Hooper" was a softer approach for Norm and a critic favorite. Norm played the straight man for once. Norm's distinct voice has paid off for him professionally. He has voiced "Lucky" the dog in three "Dr. Dolittle" movies. He's also voiced "Death" for one episode of "Family Guy" and the Genie for "The Fairly Odd Parents".
On September 12, 2006, Norm launched his long-rumored comedy album, "Ridiculous". He is back to doing stand up and recently has been emerging as a serious poker player and can be seen competing at the World Poker Tours Celebrity edition on the Travel Channel.
null