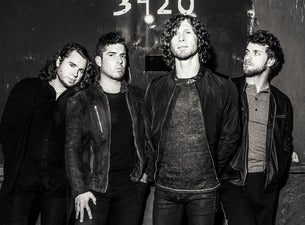 NOTHING MORE IN CONCERT:

Rising nu metal act Nothing More continue to breathe new life into the genre with their sonically innovative production, virtuosic musicianship, and heart-pounding performances. In just a few short years the band has logged more than 500 shows, and it shows, each one an adrenaline-filled affair characterized by searing guitar riffs, snarling vocals, and a one-of-a-kind welded percussion platform that frontman Jonny Hawkins hammers as he stomps around the stage. Fans lucky enough to see anthems like "This is the Time (Ballast)" and "Jenny" performed live on Nothing More's upcoming tour dates will have the pleasure of experiencing a talented young band who also happen to be seasoned performers.

Texas-based nu metal outfit Nothing More is comprised of singer Jonny Hawkins, guitarist Mark Vollelunga, bassist Daniel Oliver, and drummer Paul O'Brien. The released their debut album Shelter in 2003, boarding a salvaged RV soon after for extensive touring in support of the release. From their earliest days the band has been explicitly committed to connecting with fans through next-level performances, and their electrifying live shows on the road quickly earned them a cult following. The band continued to grow their fanbase with the release of Vandura in 2006 and Save You/Save Me in 2007, but their biggest success to date came in 2014 with the release of their self-titled fourth album. That album drew praise from critics and fans alike for its sonic ambition and dynamic musicianship, drumming up big expectations for the band's upcoming tour dates.