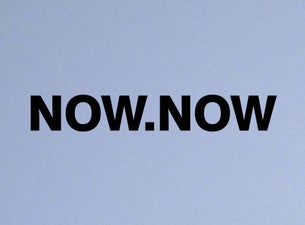 Since forming in the early 2000s, Now, Now has seamlessly weaved their way through guitar-dense alt-rock and buoyant electro-pop, thrilling live audiences along the way. The duo of vocalist, guitarist and keyboardist Cacie Dalager and drummer Bradley Hale joined forces in the Minneapolis suburb of Blaine, Minnesota, as fellow members in their high school marching band. The pair began writing songs together and eventually came up with the name Now, Now Every Children, an inside joke that came from a typo during an online exchange (what was supposed to be "Now, now you guys" became "Now, now every children") and the name stuck.

The band's first show, with help from Brad's sister Britty on keyboards and friend Justin Schweim on bass, was held at a Minneapolis coffee shop. Soon after, the band signed a record deal with Minneapolis indie label Afternoon Records, who released two EPs and the duo's debut full-length album, Cars, in 2008. In an effort to get wider exposure, Hale placed an ad for the band in the magazine Alternative Press. It caught the attention of one of the hottest emo groups of the time, Paramore, who invited Now, Now Every Children on their 2009 European tour. New guitarist Jess Abbott also came along for the ride.

The trio officially shortened their name to Now, Now and recorded and self-produced the EP Neighbors in 2010. The next year they hit the road alongside acts like Hellogoodbye and Jukebox the Ghost, and saw their star rise a little higher when their song "Neighbors" appeared on an episode of Grey's Anatomy in 2011. This led to a deal with Trans Records, the label of Death Cab for Cutie's Chris Walla, who released their second album, Threads, which landed on the Billboard's Heatseekers Albums chart in 2012.

Over the next few years, Now, Now took a break from recording and touring, and it wasn't until spring 2017 that Dalager and Hale came back together (this time without Abbott) to release the single "SGL." Their third album, Saved, followed in 2018, along with appearances at major U.K. festivals and a North American tour.