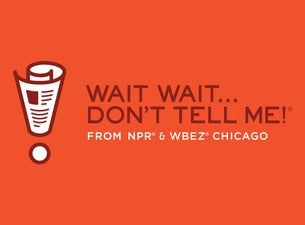 When the majority of news becomes downright depressing, the folks at National Public Radio (NPR) and WBEZ-Chicago have just the right tonic. Wait Wait... Don't Tell Me! is a Peabody Award-winning comedic news quiz show that's been offering up timely wisecracks since its on-air debut in January 1998. Over the years, it's become one of public radio's most popular shows, with millions of listeners tuning in nationwide every week.

Host Peter Sagal, a writer and playwright, has been with the show since its inception, originally as a panelist. Each week, Sagal leads a rotating panel of guests, including comedians, actors, writers, and listeners of the show as they pick apart the week's weirdest and most fascinating news — often to hilarious results. Since 2005, the show has been recorded in front of a live audience. It's taped nearly every Thursday evening, beginning at 7:30 PM at the Chase Bank Auditorium in downtown Chicago. But they also sometimes venture beyond the Windy City, making stops in various cities around the country every year.

Alongside regular panelists like Mo Rocca, Jessi Klein, and Paula Poundstone, a number of actors, musicians, athletes, and politicians have served as guests, from Barack Obama and Madeleine Albright to Salman Rushdie and Stephen Colbert. Listeners of the show also get a chance to participate in games based on the week's news, like "Bluff the Listener," in which the contestant has to pick out the real news story from three presented by the panelists. Winners get a custom-recorded greeting by one of the cast members for their personal voicemail.

Wait Wait continues to be a favorite among listeners and those lucky enough to see the show live. It was even given a Peabody Award for excellence in broadcasting in 2008, 10 years after it first hit the air. After 10 more years, the show celebrated its 20th anniversary in 2018 with a tour around the U.S., hitting up venues such as Los Angeles' Greek Theatre and New York's Carnegie Hall.