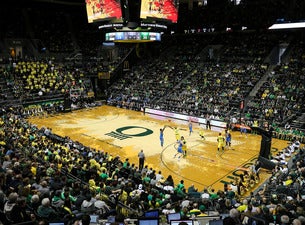 Boletos para Old Basketball Do Not Use

Acerca de Old Basketball Do Not Use

Few places are more challenging for opposing teams than Oregon’s Matthew Knight Arena. Since opening in 2011, the Ducks are more than 100 games above .500, and the home team is now attracting record crowds not seen in four decades.

Coming off the program’s first Final Four appearance since 1939, the 2017-18 season promises to be an adventure featuring one of the nation’s top recruiting classes, led by five-star wing Troy Brown Jr. The freshman also have a shot-blocker in Kenny Wooten, a gold medalist from Canada in Abu Kigab, and the son of a former NFL star and Olympic 400 meter medalist in Victor Bailey Jr.

There are also a number of players with experience off that NCAA Final Four team. Sophomore guard Payton Pritchard, a native Oregonian, leads the team in virtually every statistical category after starting 35 games last year. Senior Roman Sorkin and sophomore Keith Smith also made important contributions to Oregon’s Final Four squad and will help make the push for the postseason this year.

Finally, Oregon welcomes a pair of graduate transfers who have combined to score nearly 2,500 career points: Elijah Brown from New Mexico and MiKyle McIntosh from Illinois State, along with Georgetown transfer Paul White and freshman M.J. Cage, who both redshirted last year.

The one constant during Oregon’s rise to the top has been head coach Dana Altman, who is now one of just 34 coaches all-time with 600 career Division I wins.

Oregon has made five straight NCAA Tournament appearances and won a school-record 46 straight home games at one point during that span, a streak directly connected to those fans who bring Matthew Knight Arena alive night in and night out.