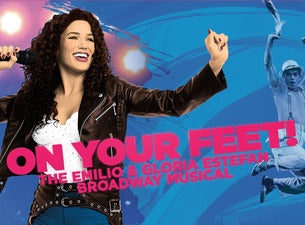 Boletos para On Your Feet (Touring)

Acerca de On Your Feet (Touring)

On Your Feet! on Tour

Get ready for one of Broadway's most colorful jukebox musicals with On Your Feet! The Story of Emilio & Gloria Estefan. The production is based on the husband-and-wife team who brought Latin pop to the world in the '80s. Together, they've collected dozens of Grammy Awards for their irresistible, Cuban-infused pop, and it's their iconic hits — including "Get on Your Feet," "Conga," "1-2-3" and "Rhythm Is Gonna Get You" — that fuel this high-energy show. In between the sizzling dance moves and big pop numbers (brought to life with an onstage band), the cast takes us through the Estefans' powerful love story and inspiring rise to international fame. Emilio and Gloria themselves played a large role in the making of the musical's story and music, of course. Alongside the '80s megahits they made as Miami Sound Machine, the musical showcases several of Gloria's most poignant ballads, plus the original song "If I Never Got to Tell You" with lyrics by Gloria and music by her daughter Emily Estefan.

The story begins with a young Gloria in the Little Havana neighborhood of Miami. She meets Emilio Estefan, a member of the Miami Latin Boys (eventually the Miami Sound Machine). As the two grow close — as artists and lovers — tension grows between her and her mother as she tries to juggle time caring for her father who's been diagnosed with multiple sclerosis. All the while, Gloria and Emilio push to have their music heard. By Act II, the duo have officially made it. They're churning out hits and traveling the world, until Gloria breaks her back in a near-fatal accident — then rises through adversity to perform again.

On Your Feet! premiered on Broadway in 2015 and is directed by two-time Tony Award winner Jerry Mitchell (Kinky Boots) with choreography by Sergio Trujillo (Jersey Boys) and a book by Academy Award–winning screenwriter Alexander Dinelaris. Since then, the musical has gone international and toured throughout the US and UK.