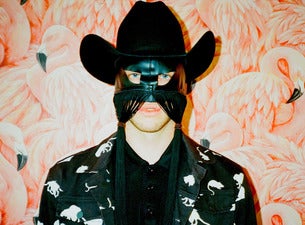 Mysterious cowboy rocker Orville Peck and his band perform a theatrical version of vintage country music: Sequins, fringe, big hats and the singer's trademark masks, which obscure his face both on stage and off. It's no staid night at the saloon - his backing players are Toronto post-punk band the Frigs, and Peck performs his nocturnal, road-worn songs with bravado. After touring alongside indie-folkers Lord Huron in the beginning of 2019, Peck set off for months of headlining shows in America, Canada and Europe. His festival bookings include Austin City Limits, London's Visions Festival, Washington's Thing, North Carolina's Hopscotch, Nashville's AmericanaFest, Norway's Oya, Sweden's Way Out West, Texas' Trans-Pecos, Pitchfork Paris and Iceland Airwaves.

Who is that masked man? Enigmatic troubadour and outlaw country sensation Orville Peck emerged in 2017, a Canadian cowboy who's part rodeo, part Twin Peaks. Though he prefers to keep his identity a riddle - photographed and performing exclusively in one of his fringed masks - Peck has admitted he's played in punk bands in the past, and was a fan of Johnny Cash, X and Neil Young. Released in 2017, his debut single "Dead of Night" was a twilight pick-up truck drive through 1950s twang, '90s dream pop and contemporary indie rock. He promptly signed to esteemed independent label Sub Pop, which released his 12-song debut album, Pony, in 2019. Painting himself as "psychedelic outlaw cowboy" who "croons love and loss from the badlands of North America," Peck sings deeply personal stories and songs under haunting, nostalgic reverb. His debut made an impact thanks to its gauzy textures, vivid storytelling and queer narratives that subvert country masculinity. It made such a splash that Pony ended up on the long list for the Polaris Prize less than two months after its release.