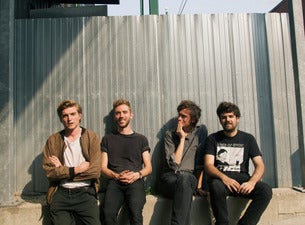 Canadian post-punks Ought are masters of their craft, playing everything from funky, celebratory jams to reflective, quieter elegies with equal skill and seeming effortlessness. Songs often start with sparse, spacious guitar riffs before turning into densely layered sonic free-for-alls, complete with shimmering keyboards, rattling snare rolls, and melodic basslines. Each instrument takes the song in a brilliant new direction that’s sure to floor ticket buyers, who’ll be jumping around with gleeful abandon as the tempo and intensity ratchet up for a thrilling climax. The ringleader of this sonic circus is frontman Tim Darcy, whose speak-singing vocals recall innovators like David Byrne and Ian Curtis on hauntingly cathartic epics like “Today, More Than Any Other Day”, “Habit”, and “Beautiful Blue Skies”. On tour Ought’s unique post-punk sound conjures up an unrivaled energy that stays with listeners long after the lights go down.

Since forming in 2012, Ought has quickly won over countless fans and critics with their innovative brand of post-punk. Tim Darcy (guitar/vocals), Tim Keen (drums), Matt May (keyboards), and Ben Stidworthy (bass) began living and rehearsing together in Montreal, and they soon after independently released their 2012 debut EP New Calm. After a couple years of grassroots promotion, the band wound up inking a deal with Constellation Records to release their first full-length album, 2014's More Than Any Other Day. The cerebral and provocative sound of the record wowed critics, garnering praise from outlets like Rolling Stone, Pitchfork, and Paste. Ought continues to explore their thrilling and inventive style both at their haunting live shows and on their increasingly poised recorded output, which includes 2015’s acclaimed Sun Coming Down.