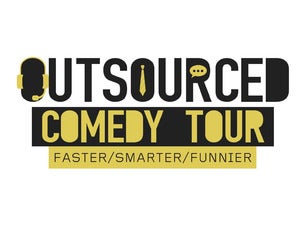 Outsourced Comedy Tour - SMARTER. FASTER. FUNNIER.
The Outsourced Comedy Tour brings some of the finest Indian comics to stages across the US. From your co headliner Raj Sharma, born and raised in a traditional Indian household in small-town Texas, to the professional poker star, Kabir "Kabeezy" Singh one of California's top comics, this tour offers an hilarious insight into life as an Indian in America today.
Bringing some of today's top mainstream comics together with guest appearances from local talent, the Outsourced Comedy Tour can be enjoyed by everyone.

Your Outsourced Comics
Raj Sharma began his comedy career in 2002 and has never looked back. His is an original member of The Gurus of Comedy, Pundits with Punchlines, The United Colors of Comedy and Frat Pack Comedy. In 9 years, Raj has worked across America, England and Ireland alongside some of the biggest names in the business including Russell Peters, Maz Jobrani, Daniel Tosh, Pablo Francisco, Bryan Callen and Tom Rhodes. Raj can regularly be found enthralling sold out audiences in nationwide clubs including The Improv, The Comedy Store and Caroline's on Broadway. His genuine passion for comedy is clear and audiences find it impossible to resist his captivating charm. With no two shows ever the same, you too will find yourself returning night-after-night to enjoy Raj's quick-witted crowd work and his intelligent story telling. Described as "...head crushingly funny..." ~ Tom Rhodes and "...funny in three languages..." ~ Bryan Callen, Raj is endearing, intelligent and a must-see for all stand-up fans.

Former class-clown, Kabir "Kabeezy" Singh, is the other headliner who fills the show with enthusiasm and wit. A fast-rising star; he is the winner of both of the major Bay Area Stand up Comedy Competitions in 2009 and 2010, beating over 160 of the best comics in California each year by coming in first in every round of both years. Kabeezy is a regular at every major club in the Bay Area. Kabir Singh has also headlined the San Jose Improv selling the show out 4 different times including a Friday night in 2011. Kabir has also headlined sold out shows at the SF Punchline, Sac Punchline, Rooster T. Feathers Comedy Club in Sunnyvale, CA, Tommy T's in Pleasanton and also headlined a whole weekend at Pepperbelly's Comedy Club all in the first 4 years of doing stand up comedy!!! Kabir was also named in the "Top 5 Comics to Watch" by all three major bay area newspapers and has hit the stage at every major comedy club in California.

Your host Sammy Obeid is a UC Berkeley graduate turned stand up comic. Sammy has recently become one of the sharpest, funniest and most versatile stand up comics in the nation. Sammy has opened for Robin Williams, Russell Peters and has performed on 2 national tours. He was also a finalist in the 2010 SF International Stand Up Comedy Competition whose past finalists include Dane Cook, Dana Carvey and many other legends.

Samson Koletkar- Samson is the world's only Indian Jewish Standup Comedian. Koletkar has entertained audiences in India, Canada and throughout the U.S. with his cerebral, clean, thought-provoking satire and witty observations. He has also toured with Pundits with Punchlines, Make Chai Not War, and Funatical Comedy Tour. He has been featured on Asian Jewish Life and Indian Express, & has also appeared on HumDesi Radio (Canada) and CBS.