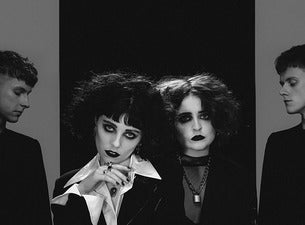 It's not often that a band gets to play to a sold-out Madison Square Garden before they've even put their first record out. But that's the situation U.K. quartet Pale Waves found themselves in back in June of 2017. Granted, they were there as the support act for British pop powerhouse The 1975, but the fact they were hand-picked by the headliner's frontman, Matt Healy, is indicative of the sort of, well, waves this group has been making in a short amount of time.

Formed by singer/guitarist Heather Baron-Gracie and drummer Ciara Doran while they were students at Manchester's BIMM Institute, Pale Waves debuted in 2017 with the swoon-worthy single "There's a Money," which infused the shimmer and yearning of ‘80s alterna-icons like The Cure and Cocteau Twins with a modern pop thrust and the sort of disarming chorus ("I would give you my body / but I'm not sure that you love me") that sucker-punches you in the gut like a breakup text. The follow-up release, "Television Romance," was a dizzying dance-pop jam whose Healy-directed video — featuring Pale Waves performing in all their goth-glam glory in a cramped apartment living room — served as an unsubtle metaphor for a band brimming with potential and ready to break out of the indie scene's cozy confines. That moment finally arrived with the September 2018 release of the band's debut LP, ‘My Mind Makes Noises,' which hit the Top 10 in the U.K. and No. 1 on Billboard's Heatseeker chart in the U.S. The album is not only a showcase of Pale Waves' stylistic breadth — as they bound from the new-wave sparkle of "One More Time" to the cool, finger-snapped R&B of "Loveless Girl" — but Baron-Gracie's emotional depth as a lyricist: When she chronicles her grandfather's death on the acoustic ballad "Karl (I Wonder What It's Like to Die)," there isn't a dry eye in the house.