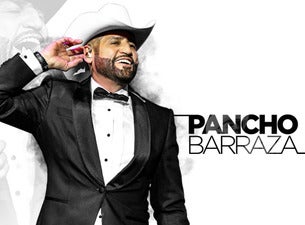 By his fourth release, El Vagabundo Que Te Ama, the lovelorn crooner proved that his expertise lies in his adventurous banda romancers. That 1998 album offered "Mi Enemigo El Amor" — a heartrending smash whose online streams have been clocked at 44 million on Spotify. To date, Barraza boasts nearly 40 albums, including numerous live recordings and compilations.

Born in the small town of Juan José Ríos in Sinaloa, Mexico, in 1961, Francisco Javier Barraza Rodríguez (aka Pancho Barraza) demonstrated his musical prowess at a young age by participating in local musical contests. Evolving his craft as a singer-songwriter, Barraza decided to enroll at the Bénemerita Escuela Normal to become a music instructor, and by age 22 he was teaching at a middle school in Villa Unión.

Around that time, Barraza joined the town's church choir, and he also became a bassist for a group called Karisma. By the late 1980s, he'd immersed himself in the burgeoning scene of regional Mexican music along with Banda San Sebastian and Banda Camino, before making his mark with the now-famous Banda Sinaloense Los Recoditos in the genre's hotbed of Mazatlán.

With a riveting lineup that included Poncho Lizarraga, Enrique Valdez, and siblings Victor, Miguel, and Silvano Sarabia — and Barraza fronting Los Recoditos — the big-band ensemble released their debut in 1990, A Bailar de Caballito. He led the band until 1995, when he launched his solo career with Mis Canciones de Amor, backed by Banda Santa María.