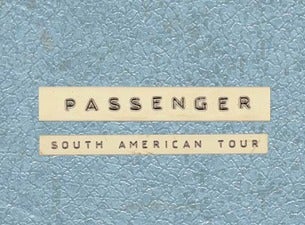 Mike Rosenberg, known better as Passenger, is a British singer/songwriter quickly impacting the folk-rock scene with his earnest and introspective lyrics. Passenger was formerly a band fronted by Rosenberg that released a number of albums before the band members parted ways. Rosenberg continued with the name, and his latest release, All the Little Lights, is a folk-rock, indie-pop album filled with songs of loss, love, and hope. Critics have praised Rosenberg for his charming and unique voice, poignant yet witty lyrics, and an album that feels fleshed out with additional strings, brass, and restrained percussion. Storming up the Billboard Hot 100, the single “Let Her Go” is a charming, whimsical, and lyrically remorseful song about a relationship in retrospect. Rosenberg supported fellow Englishman Ed Sheeran for most of 2012 before embarking on his first US headlining tour in summer 2013. Concertgoers applaud Rosenberg for his intimate one-man-band shows, raw talent, and charming banter. With tickets selling out for shows across Europe and Australia, fans anticipate an unfaltering music career ahead for this talented singer/songwriter.