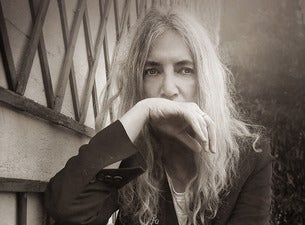 It has been eight years since Patti Smith ‘the godmother of punk’ last toured Australia, and nearly 41 years since the release of her first and most celebrated recording Horses. Horses was conceived to be, in her description, “three chord rock merged with the power of the word.”

“Horses and its shamanistic punk poet siren are undiminished 40 years on” theartsdesk.com

Best-selling author, performance poet & visual artist Patti Smith’s list of artistic accomplishments doesn’t end there. She is a Rock and Roll Hall of Fame inductee, recipient of the Polar Music Prize, a human rights activist and also holds the honour of “Commandeur des Arts et des Lettres”  from the French Ministry of Culture.

She will be accompanied by two members of the original group, Lenny Kaye and Jay Dee Daugherty, bassist / keyboardist Tony Shanahan, who has been a part of her band for twenty years and Andy York to perform Horses in its entirety during this not-to-be missed tour, as well as several time-honoured favourites.

In November of 1975, Patti Smith and her band recorded her debut album Horses at the famous Electric Lady Studios in New York City. An album that has come to be regarded as a seminal and landmark recording, that continues to have resonance and relevance for succeeding generations of musicians and artists. Don’t miss this rare opportunity to see Smith honour the lasting influence of Horses on this exclusive Australian tour.

“This is protest music. But it is protest with a fierce edge that seamlessly weaves a new politics into a rich legacy of rock-and-roll rebellion: She is celebrating a connection between music and movements that is swaggering and confident and more than ready to declare—as Smith does—that “we’re gonna change the fucking world!” ” – The Nation

“It will be a true, proud celebration.”  Patti Smith