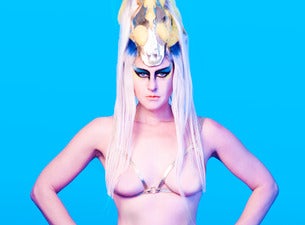 Electronic pop provocateur Peaches blends undeniably catchy hooks with performance art at her thrilling live concerts. Pitched halfway between Lady Gaga’s art pop perfection and Suicide’s confrontational synthpunk, Peaches’ intense dance beats and shocking stage show treat ticket buyers to an edgy spectacle they won’t be able to look away from. Peaches rewards her audience’s curiosity with elaborate costume changes and choreography on tour. All her style is matched by some serious substance, and she shows off rock star pipes on fan favorites like “Why Don’t You Talk to Me”, “Serpentine”, and “I Feel Cream”. Whether you consider her an art house genius or a subversive pop princess, you won’t be able to forget Peaches’ insane live shows.

Peaches, aka Merrill Beth Nisker, grew up a class clown in her native Toronto, Canada. She relocated to Berlin, Germany in 2000 and received a recording contract from Kitty-Yo following a one-off performance she did shortly after arriving in the country. The same year she programmed and recorded every instrument on her critically praised debut album The Teaches of Peaches. Her 2006 album Impeach My Bush helped her reach a wider audience thanks to guest contributions from contemporaries like Joan Jett, Josh Homme, and Feist. In 2012 she wrote, directed, and performed in her first feature film, the musical mock-biopic Peaches Does Herself, which received warm reviews during its premier at the Toronto International Film Festival. Peaches continues to deliver provocative and groundbreaking performances, both at her jaw-dropping live shows and on stellar albums like 2015’s RUB.