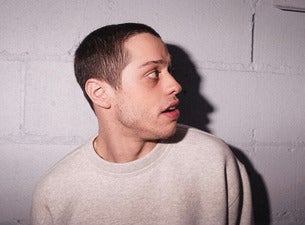 Part of Pete Davidson's appeal lies in his guy-next-door quality. That is, if the guy next door were a street-smart, unendingly hilarious smart aleck. Being both a millennial and a native New Yorker, Davidson's got a kind of no-holds-barred approach to comedy. In his eyes, nothing is sacred, especially if he can get a good laugh out of it. When it comes to joke fodder, even the intimate details of his mother's life are up for grabs, not to mention his own innermost workings. When Davidson is up on the stage doing what he does best — making people laugh — there's no posturing, no elaborate setups. At one of Davidson's shows, you just get the feeling you're watching somebody give you the unvarnished, inside dope on everything that's going on around him — and what's going on around him is nothing short of hilarious.

Born in Staten Island, New York, in 1993, Pete Davidson encountered tragedy early in his life when his firefighter father was lost in the 9/11 attacks on New York. Like a lot of great comics before him, Davidson eventually turned the tragedy around and channeled it into a career in comedy. He started young, performing as a stand-up comic while still in his teens, and he was not yet 20 when he made his first TV appearances, on MTV comedy shows like Failosophy and Guy Code. In 2014, at the age of 20, Davidson became the youngest performer ever to join the cast of Saturday Night Live, and his sketches for the show soon became fan favorites. Around the same time, he also began to turn up in movies, and has appeared in such films as School Dance, Set It Up and Judd Apatow's Trainwreck. But he never abandoned his stand-up work, and in 2019, Davidson and fellow SNL cast member John Mulaney did a comedy tour together called Sundays with Pete and John.