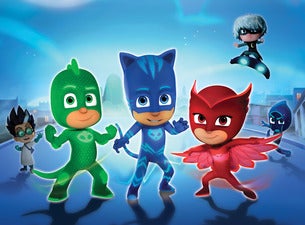 Ever since Superman and Batman made their comic-book debuts in the 1930s, kids have always been drawn to superhero stories. They've indulged aspirational fantasies of acquiring their own special powers and saving the world. The Disney Junior animated series PJ Masks is a superhero franchise with a twist — the superheroes are regular kids themselves.

By day, Connor, Amaya, and Greg are your typical first-graders playing on the schoolyard. By night, they turn into Catboy, Owlette, and Gekko — the costumed crime-fighting trio who announce their transformation on each episode with a motto that every parent knows by heart at this point. (All together now: "PJ Masks are on their way, into the night to save the day!")

Since its debut in 2015, PJ Masks has joined the ranks of Paw Patrol and Peppa Pig in the pantheon of TV shows that have provided young children with an early education thanks to the art of the Netflix binge-watch.

Like those programs, PJ Masks has spawned an IRL offshoot in the form of a live revue. After touring the PJ Masks: Time to Be a Hero! show over the course of 2017-18, our heroes return to stages across North America in 2019 with a brand-new production, PJ Masks Live! Save the Day! The show features (adult) actors dressed up as Catboy, Owlette, and Gekko, and it presents its storyline through a series of acrobatic musical numbers set against animated video backdrops.

Expect to see the PJs square off against their most infamous nemeses: the mad scientist Romeo; the silver-haired, moonbeam-wielding Luna Girl; and the shadowy Night Ninja with his army of Ninjalinos. (The show also includes a handful of new songs not featured on the Time to Be a Hero! soundtrack that was released in October 2018.)