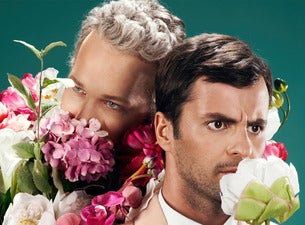 Before forming Polo & Pan, Paul Armand-Delille (Polocorp) and Alexandre Grynszpan (Peter Pan) were highly sought-after DJs playing for A-list crowds at Paris' beloved Le Baron nightclub. There, they knew exactly how to keep the dance floor full, all night long. As a duo, they manage to do the same — in clubs around the world — with a sound that combines infectious beats with influences that span continents. Polo & Pan have become road warriors, landing slots at the 2017 Pitchfork Music Festival and 2019 Coachella Festival, and selling out venues across North America in 2019 for their Caravelle World Tour.

Polo & Pan may have met behind the decks at one of the hottest dance clubs in Europe, but their music hits on sounds from across the globe. In 2012, Paul Armand-Delille (Polocorp) and Alexandre Grynszpan (Peter Pan) were both resident DJs at the now-defunct Parisian club Le Baron when they decided to join forces as a duo. As both travelers and DJs, the two began to combine their wealth of musical knowledge with their mix of influences — ranging from modern pop, pioneering electronic, classic psych-rock, French hip-hop, Italo-disco and classical music. They released their first EP, Rivolta, in 2013, followed by Dorothy, their mesmerizing electronic tribute to The Wizard of Oz. But it wasn't until 2017 that the duo finally released their debut album, Caravelle, which highlights their ability to weave together global sounds and vintage samples into blissful melodies. Two years later, they headed back into the studio for a second album. Their whimsical electro-pop is as fitting for a sunny day at the beach as it is for the most chic of clubs. Even if you don't understand all their lyrics (which are mostly in French, of course), it's hard not to be transfixed by their infectious grooves.