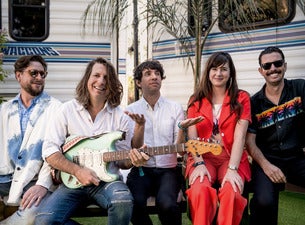 LA-based electro duo Poolside may be relatively new to the disco revival game, but they've already become a summertime soundtrack staple with their daytime disco sound. The pair's laidback jams were practically made to be heard, well, poolside, but their live shows are just as suitable an environment, providing fans a truly memorable experience that's equal parts dance party and chill zone. With their relaxed stage presence and unhurried jams like "Do You Believe?" and "Slow Down", Poolside always satisfy on their must-see tours.

Poolside was formed in Los Angeles in 2010 by DJs and producers Filip Nikolic and Jeffrey Paradise. While Nikolic had cut his teeth making dance pop with Junior Senior and Ima Robot, Paradise earned his salt as a DJ in San Francisco's hip club scene. Poolside -- part pop, part lifestyle soundtrack -- is both a realization of and a departure from the duo's previous experiences. After making waves in 2010 with their debut EP/single "Do You Believe?", the duo continued to generate buzz with a popular remix of Neil Young's "Harvest Moon".  They delivered on all the hype in 2012 with their critically acclaimed full-length debut Pacific Standard Time, and they've been thrilling ticket buyers ever since with their unforgettable performances on tour.