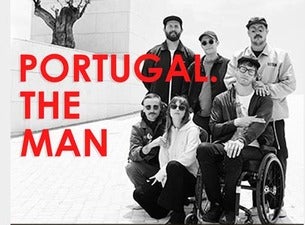 PORTUGAL. THE MAN IN CONCERT:

Indie rock outfit Portugal. The Man have been delighting fans with their obscure lyrics and impressive guitar skills since their inception in 2004. Whether they're belting out "Modern Jesus" in unison or shredding on "Purple Yellow Red and Blue", Portugal. The Man are constantly reinventing themselves as they rework their original songs during their live shows. Back on tour, the band will have fans dancing to their catchy tunes all night on a string of highly
anticipated dates.

Alaska-based Portugal. The Man started out as a side project by John Gourley after the split of his band Anatomy of a Ghost in 2002. He recruited friend Zach Carothers on bass and enlisted the help of a drum machine to give the band a more complete sound. The duo gathered three more members to round out the band's lineup and spent time crafting their music and touring heavily before the release of their 2006 debut Waiter: "You Vultures!" Although the band has gone through several lineup changes their signature sound has never been compromised on the six records that have followed, and they've remained one of indie rock's hottest acts throughout the course of their 10-year reign. Known for their thrilling live performances, Portugal. The Man are set to share their vast collection of jams with dedicated followers and new fans on a highly anticipated world tour.

"Sonically sensational -- as expected -- and their musicianship was evident and tasty. Songs flowed together spectacularly and easily, with at least three clever Beatles homage/covers."

"This was an amazing show, the band had played a different array of music from all their albums, not just their newest. Wonderful energy and I can't wait for them to come back into town again!"

"These guys make seriously good music and were great to see live. Played a good mix of new album (Evil Friends) and older stuff from Censored Colors, Satanic Satanists, and others."