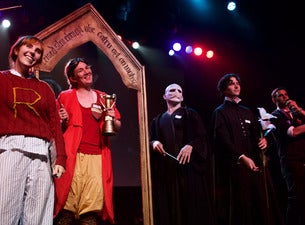 The incredible world that J.K. Rowling created with her ‘Harry Potter' series still lives — and thrives — in millions of imaginations today. The interest in Rowling's world gave birth to PotterCon, which allows grown-up ‘Potter' fans the chance to partake in contests, costumes, and concession stands themed around the world of ‘Harry Potter.'

Costumes are encouraged at this daylong, adults-only event, and grades will be handed out — at a contest to see which attendee best embodies PotterCon's cosplay spirit. Venues are also decked out in thematically appropriate decorations, adding to the day's fully immersive vibe.

While the day is centered on a live stage show starring conference staffers, PotterCon also provides ample time for attendees to get acquainted with one another. The requisite Sorting Hat ceremony divides the audience into Hogwarts houses, while trivia competitions test the audience's knowledge of Potter-world minutiae.

There are attractions around every corner of PotterCon: Wand-making stations allow aspiring magicians to create their own spellcasters. Divination outposts predict the future. Games of Wizard's Chess pit attendees against each other on a strategic level. Quidditch Pong is a tabletop homage to ‘Potter' magicians' signature sport. Merch stands, meanwhile, hawk jewelry, wands, and other souvenirs of time spent amid fellow magic-seekers.

Rowling-concocted libations on the menu include Butterbeer, Firewhiskey, and Potter's Potion; those looking to avoid alcohol can quench their thirst with Skele-gro and Gillyweed. And what's a celebration of Harry Potter without Hufflepuff popcorn, mudblood sno-cones, and giant turkey wings that seem to have been targeted by growth charms?

From the Sorting Hat ceremony to the Hogwarts-worthy snacks, the raucous Quidditch Pong table to the creativity-stoking wand-making stations, this loving homage to Rowling's career-defining work more than lives up to its promise of being "4,224 pages of fun."