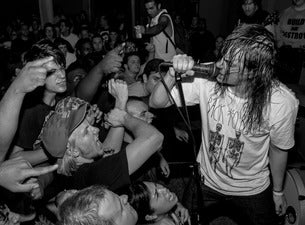 One of the most forceful and singular metal groups to emerge in the 2010s, Power Trip is simultaneously a formidable current of today's metal spirit and a throwback to the classic thrash of the ‘80s. Power Trip is Riley Gale (vocals), Chris Ulsh (drums), Chris Whetzel (bass), Blake "Rossover" Ibanez (guitar), and Nick Steward (guitar). Not too long after their formation in 2008 in Dallas, Texas, these guys would go on to play with some of metal's biggest names.

In 2013, after playing the metal circuit for a bit, the band signed with Southern Lord Records — home of Sleep, Sunn O))), Earth, and Pelican — and released their first album, Manifest Decimation. The album featured tracks like "Murderer's Row" and "Crossbreaker," whose thrash harked back to hardcore groups like Cro-Mags and Black Flag.

In 2017, the band released Nightmare Logic, which received widespread acclaim and shot them to metal's world stage. This second album was a definitive statement, one that channeled the grungy riffs of Metallica and the ecstatic speed of Slayer, morphing them into something that felt completely new and contemporary.

That was especially true in "Executioner's Tax (Swing of the Axe)," an instant fan favorite. Loudwire placed it at the top of their list of 2017 metal, while Exclaim! and Revolver put it at No. 2. Rolling Stone placed Nightmare Logic as the No. 11 metal release of 2017. It reached No. 22 on the U.S. Top Hard Rock Albums chart, and No. 4 on U.S. Heatseekers.

Following the success of Nightmare Logic, the band released Opening Fire: 2008-2014, a collection of their earlier tunes that had yet to find proper release. The album proved that they had pretty much been on from the start.