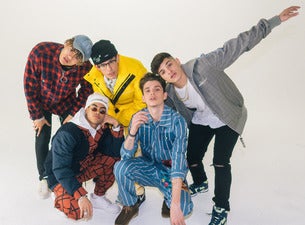 PRETTYMUCH may have been assembled by renowned music impresario Simon Cowell, but the so-called boy band is much more than just a studio creation. In fact, it's on a stage performing live that the full picture of what they do really comes into focus. For a group that has spent as much time working on its dance moves as its music, it's crucial for them to be able to put all that careful choreography in front of an audience. And when the quintet hit the stage, they bring those moves to bear in a show that's all about everyone in the room having as much fun as possible. A PRETTYMUCH performance ends up being as much a party as a concert—the group's fans are there to revel in the ecstatic, youthful vibe, to commune with their fellow PRETTYMUCH obsessives, and of course, to soak up the group's signature blend of pop and R&B. Their 2018 fall Funktion Tour across America is a perfect example of the portable party PRETTYMUCH brings with them wherever they go.

Brandon Arreaga, Edwin Honoret, Nick Mara, Austin Porter, and Zion Kuwonu all came from different parts of the country, but they were joined together in Los Angeles by superproducer Simon Cowell, the reality TV icon and boy band kingmaker. In 2016, the five young performers became PRETTYMUCH, a group dedicated to the idea of picking up where previous Cowell projects like One Direction and Westlife left off. After woodshedding their songs and their choreography, the group started to earn a following by posting videos on social media featuring their cover versions of tunes by such artists as Childish Gambino and Charlie Puth, and their dancing to music by the likes of Bruno Mars and Michael Jackson. The group released its first single, "Would You Mind," in 2017, followed by ‘PRETTYMUCH An EP' in the spring of 2018. That summer brought the appearance of their Ed Sheeran-penned single, "Summer on You."