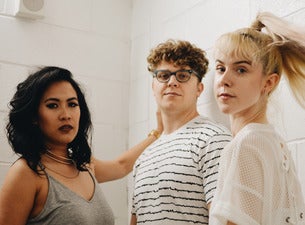 Maryland-based indie pop trio Prinze George is fast on the rise thanks to their nostalgic, synth-soaked sound and mesmerizing, gripping performances. The band has yet to release a full-length album, but they've already amassed a loyal following thanks to a string of stellar singles and an acclaimed self-titled EP that garnered comparisons to indie darlings like Lana Del Rey and MS MR. In concert the band forms a unified stylistic front, performing in all white while they groove to slick, futuristic pop gems like "Victor" and "Upswing". Frontwoman Naomi Almquist is an arresting performer, and her ethereal vocals perfectly complement the driving drums and soaring synths laid down by the rest of the band. Prinze George has already impressed fans at festivals like SXSW and Firefly, and ticket buyers lucky enough to catch them on their rise will have no trouble seeing what all the buzz is about.

Prinze George was formed in 2013 by producer Kenny Grimm and singer Naomi Almquist, two childhood friends who grew up together in Prince George, MD. They started posting tracks to Soundcloud that same year and broke through when "Victor" caught fire with fans, skyrocketing to No.1 on the Hype Machine charts and garnering major love from bloggers. They followed up in 2014 with a string of catchy singles including "Children in the Audience" and "This Time", simultaneously bolstering their growing reputation with powerful performances at major festivals like SXSW. With their hotly anticipated full-length debut slated for 2016, Prinze George has fans dying to experience  the new material at their upcoming shows.