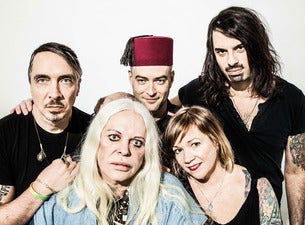 Gender-nonconforming performance artist and Psychic TV mastermind Genesis P-Orridge retired from touring in 2009, making the band's sporadic – and increasingly rare – live performances all the more essential for fans of avant-garde rock. P-Orridge is known as the godfather of industrial music thanks to his late '70s work with pioneering noise outfit Throbbing Gristle, but he's been exploring more psychedelic and dance music territory with Psychic TV since the early '80s. In concert the band takes fans on a tripped-out journey that pairs tender melodicism with explosive forays into noisy experimentation as they perform cuts from a discography that spans more than three decades. Psychic TV has always been visually oriented, and their live shows are a veritable feast for the senses, blowing fans' minds with swirling projections and witchy iconography that perfectly complement PTV's kaleidoscopic sounds. At the center of it all is P-Orridge, a magnetic presence whose occultist mystique and completely singular creative voice have rightfully earned him a place as one of experimental music's most revered figures.

Genesis P-Orridge formed Psychic TV in London in 1981 following the breakup of his seminal industrial band Throbbing Gristle. He teamed up with Peter Christopherson, a video director whose visual style helped inform the band's early work, and in 1982 PTV released their debut album Force the Hand of Chance. They maintained a prolific release schedule throughout the early '80s, but their most ambitious project during the decade was a series of 17 live albums released monthly that earned them a Guinness World Record for most albums released in a year. By 1990 P-Orridge's interests had turned towards the acid house sound coming out of Chicago, and he spent the early part of the decade fostering an acid house scene of his own in London in collaboration with various techno producers who stepped in to create music for PTV. After a turn towards more psychedelic material in the late '90s, PTV went on hiatus in 1999, but P-Orridge reformed the group with a new lineup in 2003 for extensive touring and a return to the studio that resulted in Hell Is Invisible… Heaven Is Here/e, the band's first new album in more than 10 years. They've continued to perform sporadically ever since, thrilling fans with marathon sets that plumb the depths of their vast and hallowed discography.