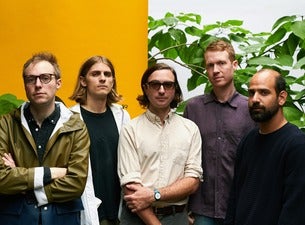 Indie favorites Real Estate have been quickly making strides towards the mainstream with their infectious brand of sunny guitar pop. Their third album Atlas cracked the US Top 40 in 2014, and the band quickly capitalized on their newfound exposure with a string of critically acclaimed live shows. As tight in concert as they are on record, Real Estate never fail to dazzle with their impressive musicianship, treating fans to inspired renditions of fan favorites like "It's Real" and "Out of Tune" on their must-see tours.

New Jersey-based indie rockers Real Estate released several popular singles before their self-titled 2009 debut LP established them as critical darlings. The album garnered the Best New Music stamp of approval from Pitchfork and landed them on tour with a variety of talented acts including Girls, Kurt Vile, and Deerhunter. The band's 2011 follow-up album Days was an even bigger success, cracking the Billboard 200 and paving the way for numerous high-profile festival appearances including sets at Coachella and the Pitchfork Music Festival. In 2014 the band released their third album Atlas to another round of critical acclaim, thrilling fans with airtight performances of "Talking Backwards" and "Past Lives" at their unforgettable live shows.

"This show was outstanding. They had an amazing performance and I wish I went the night before as well."

"Real Estate stole the night with a set that was a good mix of their two albums plus a new unreleased track. I love their records but this was music that's meant to be heard live."

"The sound was really good, and they kept it really tight through the whole performance. They played a great setlist, and didn't mess around too long before coming out for an encore..."