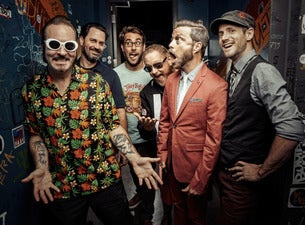 For more than two decades, California ska punk favorites Reel Big Fish have had audiences moving, shaking, and skanking up a storm with their upbeat tunes and fun-loving live shows. The band's adrenaline-filled take on traditional ska always whips fans into a frenzy, and frontman Aaron Barrett feeds off the crowd's energy as he performs catchy favorites like "Sell Out" and "Monkey Man". From Barrett's zany style and the band's brass-heavy sound to the friendly moshpit in the crowd, Reel Big Fish deliver an unforgettable concert experience fans of high-energy ska punk won't want to miss.

Reel Big Fish formed in Huntington Beach, CA in 1991 and quickly achieved popularity as part of the third wave ska movement that took the US by storm in the early '90s. After several years of playing local shows the band self-released their 1995 debut album Everything Sucks. Fans and critics embraced the album wholeheartedly, and before long the band had signed to Mojo Records. They released their sophomore album Turn the Radio Off in 1996 and scored their first hit with the single "Sell Out", an insanely catchy tune that received heavy airplay on MTV and stayed on the Billboard charts for a whopping 32 weeks. The band underwent various lineup changes in the '00s, but frontman Aaron Barrett remained a constant, leading the band on several tours during the decade including the 2008 Vans Warped Tour. In 2014 the band thrilled fans with not one release but two -- their ninth full length Bloody Street and an EP of holiday tunes titled Happy Skalidays.