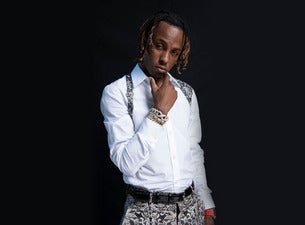 Rich the Kid In Concert

If you search "most lit concerts" on YouTube (as we're sure you do regularly) you'll find Rich the Kid's name popping up consistently. As he's steadily established his presence on the Atlanta scene over the past five years, the rapper's also built a reputation for wild live shows — just check his first-ever performance of his 2018 trap banger, "Plug Walk," at Los Angeles' The Novo to a sea of screaming fans, glowing iPhones in hand. In 2017, Rich performed alongside some of the most buzzing names in hip-hop at the Rolling Loud Festival in San Bernardino, CA, as well as at the festival's Miami iteration in 2018; he also took the stage for a medley of hits at 2018's Billboard Hot 100 Fest. In late 2018, he hit the Los Angeles Rolling Loud fest, joining a star-studded weekend lineup that included Lil Wayne, Cardi B, Post Malone, and Lil Uzi Vert.

Rich the Kid might be the best-connected guy in hip-hop, thanks to pure hustle and a bit of uncanny universal randomness. The 26-year-old rapper was born Dimitri Roger in Queens, NY, speaking Creole with his Haitian parents. But he considers Atlanta home, having moved down South with his mother at age 13. The move shifted his taste in hip-hop from NYC icons like Nas and Jay-Z to trap stars like T.I. and Jeezy, and it shows in his music. In 2013, Rich signed to the newly-founded Quality Control Music label, home of Migos, and dropped his breakthrough hit, the super-catchy "Jumpin Like Jordan," later that year. Over the next two years, Rich released a four-part series of collaborative mixtapes with Migos, called Streets on Lock, alongside his own wildly prolific string of solo tapes, and in 2016, he launched his own label, Rich Forever Music, in association with 300 Entertainment. His list of collaborations runs deep: there was his 2015 Whip It EP with iLoveMakonnen; his feature on Steve Aoki's 2016 track, "How Else"; the 2017 Diplo single "Bank Roll" also featuring Young Thug and Justin Bieber; and his out-of-nowhere 2017 collab with Kendrick Lamar, "New Freezer." (And don't forget the time he caused a minor internet frenzy after posting a screenshot of a FaceTime call with the ever-reclusive Frank Ocean.) Rich released his official debut album, The World Is Yours, in 2018, featuring his biggest hit to date, "Plug Walk."