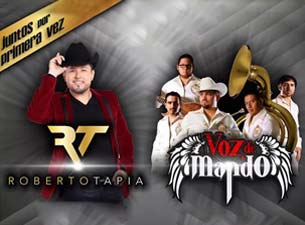 In July of 2012 Robeto Tapia released his latest album El Muchacho, which ranked well with Billboard, earning the No. 1 spot on the Hot Latin Albums and Regional Mexican Sales charts. Tapia is well suited for the gig, as his live concerts are renowned for his incredible vocal performances. Ticket holders revel in Tapia's passionate live renditions of Mirando Al Cielo and Nino de la Tuna in a festive, party-like atmosphere. Attendees at the Nokia Theater in Los Angeles in February 2013 called the experience "incredible," "unforgettable" and "amazing." Fans can rejoice as he plans to get back out on the road soon with upcoming tour dates scheduled for 2014. His latest release has earned him nominations for Artist of the Year, Male Artist of the Year and Best Song With a Band from (Premios de la Radio) The Radio Awards.

Tapia was born in in San Diego, CA, but was raised in Culiacan, Sinaloa, Mexico. Educated in music at the Difocur School of Music in Sinaloa, Tapia studied guitar, percussion and clarinet and gained performing experience through playing with the Sinaloa Symphony. Tapia has toured extensively through Latin America, Mexico and the U.S. His releases include Machete Music's Los Amigos Del M which hit shelves in January 2008. His 2009 follow-up was entitled El Nino De La Tuna, featuring Tapia's signature blend of modern and traditional musical elements. He released La Batalla in 2010 and El Corrido Del Nino on in 2011. He also released a live album in 2011 from a sold-out concert at the Los Angeles Nokia Theatre. Tapia’s recent stint as a coach on La Voz Kids has allowed him to share his experiences as a struggling musician with the kids on the show.