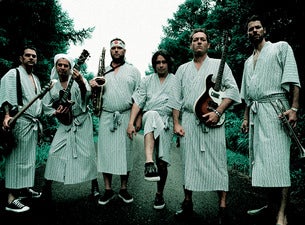 Boletos para Rocket From the Crypt

Acerca de Rocket From the Crypt

ROCKET FROM THE CRYPT IN CONCERT:

SoCal punk favorites Rocket From the Crypt are back in top form, having reunited in 2013 for a European tour that reminded ticket buyers just why their live show remains legendary among fans of energetic, pop-infused punk. With their deftly-employed horn section and anthemic sing-along choruses, the band remain a consummate live act, handing out noisemakers and inciting friendly mosh pits at their electrifying sets. From "On A Rope" to "Hippy Dippy Do," all the fan-favorites will be present on Rocket From the Crypt's upcoming tour dates.

Formed in San Diego in 1990, Rocket From the Crypt took its name from '70s underground punk band Rocket From the Tombs. Their 1991 debut album Paint as a Fragrance demonstrated considerable potential, but it was their rollicking live shows that really started to attract them a cult following. By the time of their 1992 sophomore album Circa: Now! the band had a legion of dedicated fans, resulting in extensive touring in support of the release. Notoriously, frontman John Reis announced at one point in a fanzine that anyone who got a tattoo of the band's logo would receive free admission for life to their live shows, resulting in a rash of Rocket From the Crypt tattoos around the world. The band released five more albums in the '90s and '00s before breaking up in 2005, only to reunite in 2011 for an appearance on children's TV show Yo Gabba Gabba! that has paved the way for their continued touring.