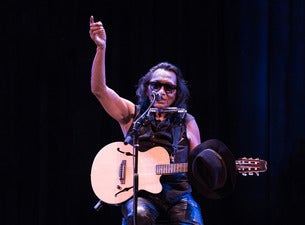 Forgotten '70s folk hero Sixto Rodriguez finally has the audience he deserves. Enjoying a renewed interest in his music spurred by acclaimed Academy Award-winning documentary Searching for Sugar Man, Rodriguez released his first music in nearly 30 years in 2012, delighting fans around the world who thought his story ended with 1971 cult favorite Coming From Reality. At his 2013 shows, Rodriguez stunned with new songs from the documentary soundtrack alongside his classic '70s material, proving he's more than worthy of his belated stardom and building excitement for a new album and tour in 2014.

Born in Detroit to Mexican immigrant parents, Sixto Rodriguez was named after his position as the sixth child in his family. Dropping out of high school at 16, he focused instead on playing shows in Detroit's various bars and clubs, attracting the eye of producer Harry Balk for his debut 1967 single "I'll Slip Away." Signing to Sussex records a few years later, Rodriguez released his 1970 debut album Cold Fact, quickly following it up with 1971 sophomore album Coming From Reality. Neither album sold well in the US, resulting in his dismissal from the label and retirement from music, but by the mid-‘70s the albums had become hugely popular in Australia and South Africa —completely unbeknownst to Rodriguez. In the late '90s, two South African fans documented their search for Rodriguez, who was rumored to be dead, resulting in 2012 documentary Searching for Sugar Man. The film took home the Oscar for Best Documentary Feature, leading to a flurry of media attention and a renewed interest in his music. With new material and tour dates scheduled for 2014, fans will have the opportunity to see Rodriguez soak up his second act as he hits the road for a series of highly anticipated concerts.

"Rodriguez is amazing! His voice, guitar playing, and song writing are superb. So much respect for this artist."

"Rodriguez was better than expected, and I expected a lot! He played some amazing guitar, sang his heartbreaking poetic lyrics, and surprised us all with some incredibly well-timed corny jokes."

"Rodriguez has perfect pitch!! His music was enjoyable, loved how he mixed it up playing other artists too!! Fun show."