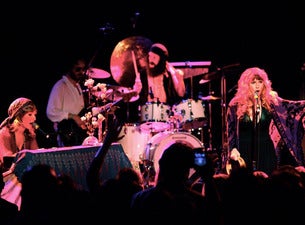 Hop into a time machine and experience the energy, ecstasy, and pure rock ‘n' roll power of Fleetwood Mac in their heyday — or at least enjoy a carbon copy of them in the present. This is Rumours, the groovy quintet who've re-created the music and misadventures of Mick, John, Christine, Lindsey, and Stevie for the Ultimate Fleetwood Mac Tribute Show.

The group — named after Fleetwood Mac's iconic 1977 album, of course — was formed in Los Angeles in 2012. They had a residency at L.A.'s famed Roxy Theatre on the Sunset Strip before appearing on the first season of AXS TV's The World's Greatest Tribute Bands in 2013. They've since taken their act on the road, thrilling fans of one of the most successful bands of all time with dead-on performances of classic tracks like "Landslide," "Rhiannon," "Don't Stop," and "Go Your Own Way."

Rumours take it back to the Mac's most potent years, between 1975 and 1987, committing to the band's looks, styles, mannerisms, and even instruments and equipment. Ned Brower plays the band's irrepressible co-founder and drummer Mick Fleetwood, while Nic Johns slings the bass as John McVie, and Rebecca Fishman takes on the powerful singing and keyboard pounding of Christine McVie. Then there's Jesika Miller, who embodies the inimitable witchy vibes of Stevie Nicks, and Taylor Locke, who effortlessly steps into the shoes of Lindsey Buckingham, one of the greatest guitarists of all time.

The group has toured around much of the U.S. and Canada. They've also put together the show Don't Stop! The Musical Misadventures of Fleetwood Mac, which they perform occasionally in Los Angeles. The hilarious musical pays tribute to the band through song as well as reenactments of its members working through their well-documented relationship woes. Whether you catch the musical or a tribute show, Rumours is the next best thing to seeing the Mac in person — maybe even better, as it captures the rock icons in their most prolific years.