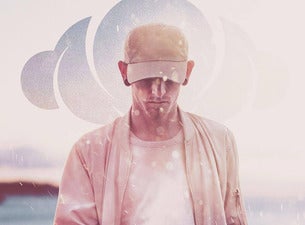 Said the Sky in Concert

There's been a noticeable change in Said the Sky's live performances. You could feel it in the air at the dinosaur-themed 2018 Lost Lands Festival in Ohio. Said the Sky's melodic electronica was on full display, from atmospheric set opener "Never Gone" into a remix of Marshmello and Selena Gomez's "Wolves" on a stage flanked by a brontosaurus and two velociraptors.

But the difference wasn't just the dinosaurs, because the same new energy was fluttering through two sold-out nights at the Berkeley, California, venue Cornerstone later in the year. Said the Sky mastermind Trevor Christensen and his dreadlocked touring synth drummer, Day Gatsby, bounced in perfect unison with the 600-person capacity crowd.

This music was performed 100 percent live. Leaving the DJ sets behind is a commitment Christensen made as his project's star began to rise.

"I never want to go back. I'm sure I'll still play some DJ sets and they're fun in the right setting, but there's so much difference in the two performances and the live set is just so much more fun," he told Relentless Beats.

Twenty-five-year-old Trevor Christensen grew up in Colorado and played piano since he was 8 years old. When he took an electronic music and production course in high school, he gravitated toward EDM and programs like Logic Pro and Ableton. At the Berklee College of Music, Christensen paired his passion with classical training and created Said the Sky.

He released the debut EP Faith in 2014 and has been nothing short of prolific since, featuring on a slew of singles by Illenium and releasing his first full-length album, Wide-Eyed, in 2018. Collaborating with the soaring Illenium has been a constant for Said the Sky, as the pair share a similar pop sensibility within their atmospheric trap-infused EDM. Their track "Rush Over Me," which also featured producer Seven Lions, peaked at No. 50 on the Billboard Hot Dance/Electronic chart and No. 35 on the Digital Dance/Electronic chart.