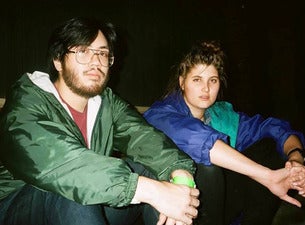 There's a wonderfully cozy and nostalgic vibe that oozes from the mellow, guitar-driven melodies of indie-pop duo SALES. The pair, hailing from Orlando, Florida, has a long history together, and that comfort with one another radiates from their soft, understated tracks. Frontwoman Lauren Morgan and guitarist and electronic wizard Jordan Shih first met in Latin class in high school. As teenagers, they wrote and recorded songs, but eventually went their separate ways for college. Both tried their hands at different musical projects and bands, but it wasn't until they returned to Orlando as college graduates that they decided to reunite.

This is when SALES — the name inspired by Morgan's parents, both sales representatives — truly began to form. With inspirations from classic rock, punk, hip hop, and electronic music, the duo began to craft their hypnotic minimalist guitar-pop. In 2013, they self-released their debut track, "Renee." The following year saw the release of a few more singles, as well as their debut six-song SALES EP. As they continued to grow into their sound, their hometown following grew right along with them, and they often sold out shows around Orlando. But as they gained more fans online, thanks to shout-outs on tastemaking blogs like CMJ and Stereogum, they eventually moved on to out-of-state gigs, hiring drummer Joy Cyr (replaced in 2017 by Malcolm Martin) to help fill out their live setup.

After releasing another handful of singles, SALES finally dropped their first full-length album, SALES LP, in April 2016. In support of the release, they headed out on a lengthy North American tour. Two years later, they returned with their sophomore record, 2018's forever & ever, and set out on the road once again to tour the U.S. Through it all, they've remained a wholly independent band, self-releasing every one of their records as they continue to charm new fans online and on the road.