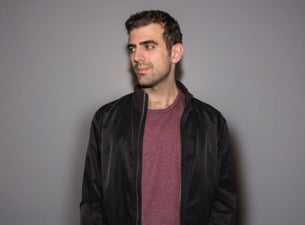 With his biting, deadpan wit and understated style, Sam Morril makes getting laughs look deceptively easy — but don't be fooled. Behind that unassuming grin and casual countenance lies a precision-tooled comic mind capable of deploying one devastating joke after another at exactly the right moment for maximum impact.

Whether on TV appearances ('Conan,' 'The Late Show with Stephen Colbert'), in front of roaring crowds at comedy clubs, or at big venues opening for a superstar like Amy Schumer, Morril saunters onto the stage and lets people into his deliciously twisted little world. Morril examines the everyday things we all deal with — relationships, parenthood, our own neuroses — and finds what's funniest about it all. Fortunately for us, he lets us in on his discoveries.

Instead of following family tradition and becoming a lawyer, Sam Morril became the black sheep and followed his comedic muse. Early on, he had a job on Comedy Central's legendary 'Colbert Report,' but there was no glamour involved — he was working as an intern.

Eventually, stand-up talent won out. After refining his chops at New York clubs like The Comedy Cellar, Morril eventually earned himself a slot on his old boss' next program, 'The Late Show with Stephen Colbert.' He's also performed on shows like 'America's Got Talent,' 'Last Comic Standing,' and 'Conan,' and he hosted 'People Talking Sports' on the MSG network.

Morril made his biggest splash with his own Comedy Central stand-up special. Between opening for comedy royalty like Amy Schumer and crisscrossing the nation's comedy clubs armed with only his deadpan wit, Morril has made a name for himself as a rising stand-up star.