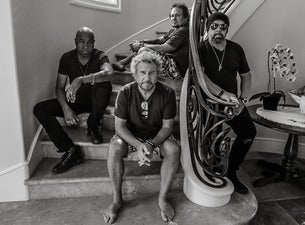 Sammy Hagar and The Circle on Tour

In 2014, rocker Sammy Hagar formed supergroup The Circle with drummer Jason Bonham, guitarist Vic Johnson, and former Van Halen bassist Michael Anthony. The following year, after the group released a live album and DVD, At Your Service, a successful run of explosive tours saw the band playing everything from Montrose and Van Halen covers to Led Zeppelin tracks.

In 2019, the group are releasing their first studio album of original material with Space Between, out May 10, followed by a North American tour from late April to mid-June. Hagar, sometimes called the Red Rocker, is known to put on a fiery show. With his band of seasoned professionals enjoying onstage camaraderie, fans can expect an electrifying setlist complete with songs from each era, as well as tracks from the long-awaited new album.

Sammy Hagar was born in Salinas, California, in 1947 and shortly after moved to Fontana, where he was exposed to classic California rock. At an early age, Hagar started learning guitar and played in a number of bands. His first frontman gig came at age 14 with the Fabulous Catillas; at the same time, he played rhythm guitar and sang in the Johnny Fortune Band.

Hagar's first big break came with his work in the band Montrose, a group started by guitarist Ronnie Montrose, who'd previously done session work for Edgar Winter, Herbie Hancock, and Van Morrison. Montrose dropped their first album in 1973, and the self-titled work charted on the Billboard 200. Some have called the album America's first heavy metal record. The group's second LP, Paper Money, came out the following year, and it reached No. 65 on the Billboard 200.

After leaving Montrose, Hagar embarked on a string of solo albums, finding a new level of success with 1982's Three Lock Box, whose hit single "Your Love Is Driving Me Crazy" reached No. 13 on the Billboard Hot 100 and No. 3 on the Mainstream Rock Songs chart. Hagar used his success to catapult his way into one of the decade's biggest rock acts, Van Halen, after vocalist David Lee Roth exited the group in 1985.

Hagar's first album with the band, 5150, reached No. 1 on the Billboard 200, while single "Why Can't This Be Love" charted at No. 1 on Billboard's Top Rock Tracks. The album went on to be certified 6x platinum. Between 1986 and 1995, Hagar would release four No. 1 charting albums with Van Halen.