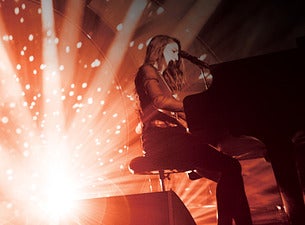 Long before "Brave" hit the charts in 2013 and became her signature tune alongside the 2007 smash "Love Song," California-based singer songwriter Sara Bareilles's music embodied the word. Finding strength in vulnerability as well as her stomping, striding piano lines, the self-taught musician has made her name exploring the complexity of love and attraction with unflinching honesty and incredibly catchy hooks. Her style is pop in almost the classical sense of the word, with songs that directly relate with ticket buyers no matter what they are predisposed to like, as she shown on tours with the likes of Counting Crows, Maroon 5, and Sugarland. All of that touring paid off on her third full-length studio album, The Blessed Unrest, which debuted at #2 in the spring of 2013, right behind Jay Z. She showed herself to be in total command of the studio, as displayed in the anthemic "Brave," which she co-wrote with Jack Antonoff of the band Fun. But while she flourishes with layers of sound or fronting a rollicking band, Bareilles is just as powerful sitting at a piano by herself, which she proved with the October 2013 solo concert DVD and album, Brave Enough: Live at the Variety. Whatever the setting, her authenticity and ability to musically reveal her own truth cannot be denied.