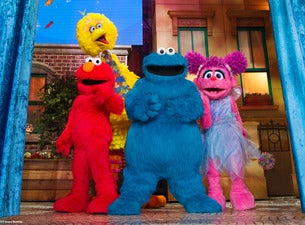 Sesame Street was conceived in 1966 to "master the addictive qualities of television and do something good with them." In 2009, 40 years after it first aired, it received a Lifetime Achievement Emmy and has long been appreciated as an American institution.

In September 1980, the first Sesame Street Live opened in Bloomington, Minnesota, with the goal of bringing the show's engaging visual style, fast-moving action, and catchy music onstage. Like the TV program, it appealed to both children and adults. The successful five-day Midwest run was just the beginning. By Christmas, the live show was filling Madison Square Garden's 4,000-seat Felt Forum and eventually entertaining 100,000 ticket holders.

Sesame Street Live! has become even more exciting since 2017, when Feld Entertainment — known for its Disney on Ice and Monster Jam traveling productions — began presenting the heartwarming interactive show in partnership with the nonprofit Sesame Workshop.

Beloved characters like Elmo, Big Bird, Oscar the Grouch, and Cookie Monster still play a major role in the reshaped show, but Sesame Street Live! Let's Party now resembles a Broadway musical thanks to a fresh pop soundtrack and spirited MCs Casey and Caleb. Two other Sesame Street Live! shows, "Make Your Magic" and "C Is for Celebration," provide their own distinct experiences.

A major addition is the pre-show experience, offered at an additional charge, which lets families tour the onstage neighborhood and hang out with a Muppet before "Let's Party" kicks off. Children can see where Elmo lives, chat with the performers, and interact with Sesame Street stars as seen on TV in their puppet form.

Sesame Street Live! Let's Party is directed and choreographed by dancer Melena Rounis and Paul Becker, the choreographer and So You Think You Can Dance judge behind Disney's Descendants.

Educators know that good teaching is interactive and, as best-selling author Malcolm Gladwell wrote in The Tipping Point, "Sesame Street was built around a single, breakthrough insight: that if you can hold the attention of children, you can educate them." Sesame Street Live! Let's Party delivers the goods on both accounts and overflows with gleeful interactive entertainment in the great Sesame Workshop tradition.