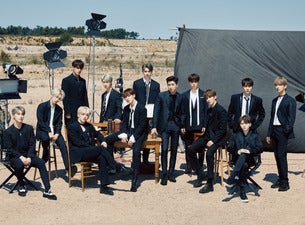 We're sorry, but we couldn’t find any events

Are they a boy band or a small militia? Even for K-pop, a genre known for its large ensembles, SEVENTEEN's size is big: 13 full-time members vie for space on each track — and in each video. But that surfeit of talent isn't a weakness. If anything, it's made this cheerful, shambling group insanely productive and versatile. Since their 2015 debut, they've released a small tsunami of EPs and a handful of LPs, and the members have become a driving force creatively. Their biggest inspiration? The urbane but still appropriate sounds of ‘90s hip-hop and R&B. These guys swagger, but underneath that toughness, they love a good pop hook, which makes them extremely fun to see live. The band undertook their first Asian tour, Shining Diamonds, in 2016. Just a year later they were on their first world tour, Diamond Edge, followed by 2018's Ideal Cut. In 2019 they returned to the road for the Ode to You world tour.

The group, like most K-pop boy bands, came together under the auspices of a label — in this case, Pledis Entertainment. They learned the craft of entertainment in a low-profile way over several years and, in 2015, scored a monthlong reality TV show on MBC called Seventeen Project: Debut Big Plan. Then, after a debut showcase on live TV, the group went pro, quickly launching their first EP, 17 Carat. A certain amount of creative control was baked in from the outset: on Seventeen Project, the group was subdivided into hip-hop, vocal and performance "units." The idea was that, with enough training, the group would become a self-producing outfit — writing songs, choreographing and producing. The group's deft blend of ‘90s hip-hop, R&B and pop has won them legions of fans, as well as awards, including best new artist awards from the Seoul Music Awards, Gaon Chart K-Pop Awards and Golden Disk Awards. Billboard even named them one of Music's Hottest Young Stars Under 21 in 2015.