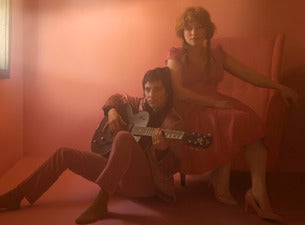 Husband and wife duo Shovels & Rope possess an undeniable chemistry that they bring to the stage with them every time they perform. Their stylish brand of alt-country incorporates elements of rock, folk, and even punk, and their eclectic live shows bring it all to life as they belt out songs like "Birmingham" and "The Devil Is All Around" in perfect harmony. Equal parts anthemic and heart-rending,  Shovel & Rope's passionate performances never fail to get ticket buyers grooving on the duo's must-see tours.

Shovels & Rope is Cary Ann Hearst and Michael Trent, two South Carolina-based musicians who began collaborating in 2008 on what was intended to be a one-off album titled Shovels & Rope. The duo quickly realized they had both musical and personal chemistry, and in 2009 they were married.  They made their sophomore outing as Shovels & Rope in 2012 with O' Be Joyful, an impressive slice of country folk that topped Billboard's Heatseekers Albums Chart and earned them the title of Emerging Artist of the Year at the 2013 Americana Music Honors & Awards.  Shovels & Rope continued to delight in 2014 with their third album Swimmin' Time, following up the release with a series of rousing performances on the road.

"Shovels and Rope was amazing. Their love and connection informs their amazing chemistry on stage. Highly recommend seeing them live!"

"Cary Ann and Michael are fantastic! With only two people, they have an undeniably full sound. Their chemistry on stage makes for a tight, highly energetic live show that pushes the rock-country envelope."

"One of the best shows I have seen in years! If you haven't seen them yet you are missing out!"