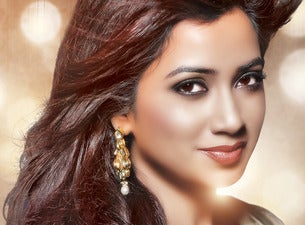 Hailing from West Bengal, India, Shreya Ghoshal is one of her native country's most celebrated pop acts thanks to her pristine vocals and alluring stage presence. Performing among acrobatic dancers and wildly patterned visuals, Ghoshal's tight vibrato thrills on hits like "Bendhechi Beena Gaan Shonabo" and "Nagada Sang Dhol Song" as she dazzles in traditional Indian saris. The young songstress has an impressive vocal range, and she'll showcase her full talent -- along with a variety of Bengali favorites -- for enthused fans on her upcoming tour.

Indian-born playback singer Shreya Ghoshal got her start at an early age when her mother taught her how to sing and pronunciate in the Bengali style. While continuing her music education Ghoshal released her debut album Bendhechhi Beena at only 14 years old to much acclaim, which sparked her rise within the Indian music community. Since then, the singing beauty has released 16 albums in six languages, won over 70 awards, and lent her voice for countless Bollywood films -- all by the age of 30. The famed songstress is sure to sing with the passion and charisma her audiences have come to know and love as she performs her collection of hits on an upcoming tour.

"The show was awesome and Shreya really knows how to entertain."

"Shreya Ghoshal is an extremely talented singer and has accomplished a lot at a young age. She and her accompanying artists were well-prepared for the show. Her vocal range is outstanding. The accompanying dancers on stage was a good idea and they performed well."

"Shreya was amazing -- what a talented diva. Loved every moment she was on the stage...enjoyed it fully!"