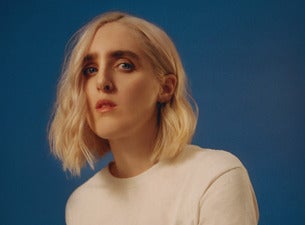 British singer, guitarist, and producer Shura is the latest honey-toned vocalist to make a splash in the electropop world. In concert Shura’s lush, R&B-influenced tracks provide the perfect backdrop for her ethereal vocals and reverb-soaked guitar riffs, and the result is an immersive concert experience full of subtle grooves and synth-soaked soundscapes. On tour she’s joined by a talented drummer and bassist/keyboardist, whose live riffs add a warm organic component to her shimmering electronic productions. Whether she’s coyly crooning on “2Shy” or casting a spell with fan favorite “Touch”, Shura always captivates ticket buyers with her angelic voice, experimental arrangements, and self-assured stage presence.

Manchester-born Shura, aka Aleksandra Denton, started playing guitar at age 13 and began recording songs a few years later. While at university she linked up with producer Hiatus and contributed vocals to six tracks on his 2013 album Parklands. Following the collaboration she taught herself how to use music software and began producing her own tracks. She made her debut as Shura in 2014 with the blog sensation “Touch”, an impressive slice of moody electropop that featured a music video she directed and edited herself. Follow-up tracks like “Indecision” and a popular remix of Jessie Ware’s “Say You Love Me” further boosted her popularity, and in 2015 she was longlisted for the prestigious BBC Sound of 2015 poll. Since then she’s continued to impress with spellbinding performances on tour that have fans eagerly awaiting her full-length debut.