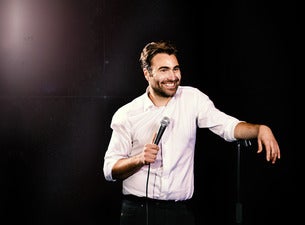 Simon Gouache's foray into CrossFit might not have given him the six-pack abs he hoped for, but it certainly paid off when his hilarious routine about his grueling exercise class misadventures became a viral video smash in 2017. The clip of Gouache reliving the experience onstage at Just for Laughs racked up more than 2 million views, helping launch him as one of Quebec's most talented and most popular young stand-up comedians.

Like a lot of acts that look like overnight success, Gouache's breakout followed years of hard work and dedication. Born into a family of doctors, Gouache realized at an early age that he wanted a different kind of career. However, he didn't feel ready for comedy even after graduating from the National School of Humour in 2007.

After two years of working as an advertising designer, he took the plunge into comedy clubs and began honing a style that mixed a keen observational sense, a self-deprecating wit, and a warmth that instantly endears him to his audience.

After making his first splash at Just for Laughs in 2012, Gouache got a major endorsement when Quebec comedy superstar Louis-José Houde selected him as his regular supporting act. Initially anxious about live performance, Gouache credits his three years opening for Houde — in every kind of venue — for giving him all the confidence he needs even as he delivers material that makes light of his own vulnerabilities and insecurities.

In 2017, he debuted ‘Gouache,' his aptly titled one-man show. His appearance at Just for Laughs and subsequent viral success has led to sellouts all over Quebec, not just for ‘Gouache' but also the new show he's presenting on the same tour. Don't worry if you're only just discovering their creator now: Gouache jokes that audiences don't need to have seen his first show to understand the second.