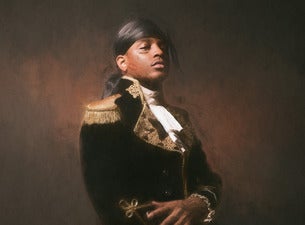 Ski Mask the Slump God performs a rap show with the energy of a punk show, a ridiculously hype event full of shout-alongs, yells, leaps and stage dives. Entirely unpredictable, you never know if or when Ski Mask will be climbing the scaffolding, removing his pants or performing in the audience. Beyond his own hits like "Faucet Failure," "BabyWipe" and "Catch Me Outside," Ski Mask is known to perform a tribute to his South Florida collaborator and comrade XXXTentacion. Ski Mask has brought his show across America and Europe, hitting the Okeechobee Music & Arts Festival, JMBLYA, Wireless Festival, Osheaga, the Lyrical Lemonade Summer Smash and, of course, multiple editions of Rolling Loud. In 2017 he supported XXXTentacion on the Revenge Tour and in 2018, he headlined the Ski Meets World Tour.

The rapper born Stokeley Clevon Goulbourne, Ski Mask the Slump God is one of the SoundCloud era's greatest success stories. Cofounder of Florida's Members Only crew with XXXTentacion, Ski Mask was one of the biggest artists to emerge from the game-changing collective that at one time or another included Wifisfuneral, Craig Xen and Robb Banks. Growing up in Florida, he absorbed the Jamaican music his family played in the house, alongside the influence of Busta Rhymes, Missy Elliott and his father, a rapper himself. After befriending future chart-topping rapper XXXTentacion, Ski Mask started uploading songs to SoundCloud in 2014. His breakthrough came in 2017 with the release of singles "BabyWipe" and "Catch Me Outside" — high octane, high energy songs with colorful videos by Cole Bennett. After signing to Republic, Ski Mask released his debut album, Stokeley, in late 2018, which hit the Top 10 on Billboard and featured the platinum-certified single "Faucet Failure." Over the years, Ski Mask has appeared on tracks with Juice Wrld, Lil Baby, Trippie Redd, Lil Yachty and more.