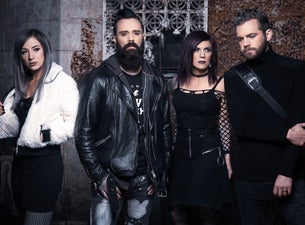 Skillet’s aggressive, distortion-heavy Christian rock has earned the band a legion of young fans who identify with their edgy, modern take on faith-based music. With their eighth studio album Rise in 2013, the band delivered a strong collection of anthemic songs carrying messages of resilience and hope, earning a No. 1 spot on the Billboard Rock Albums and Christian Albums charts. Critics praised the record for its craftsmanship and the near-symphonic proportions of singles like “Sick of It” and “Not Gonna Die,” noting that the band had grown and evolved without losing their signature sound. Formed in 1996, Skillet is fronted by husband and wife duo John and Korey Cooper. In addition to numerous GMA Dove nominations, the band has also received two Grammy nominations for their albums Collide (2005) and Comatose (2007). On the road in 2013, the band has been treating ticket buyers to their visually stunning live show while building anticipation for their headlining spot on the The Roadshow 2014 tour.