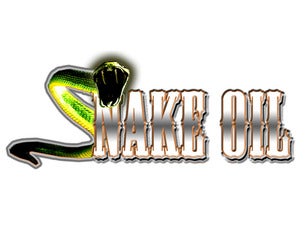 You say you wanna rock? OK then, soldier, pick your poison: Ozzy Osbourne, Motley Crue, Queen, KISS, Van Halen, Journey, Def Leppard, AC/DC, Twisted Sister, Heart, Joan Jett, Pat Benatar, Scorpions... The biggest, brashest, head-banging-est legends of rock and roll from the 1980s all come together when Snake Oil takes the stage. This six-man wrecking crew knows how to sell it: the spandex and the leather, the pyrotechnics and the fog machines, the volume and the energy. And the moves! From David Lee Roth's high kicks to Billy Idol's sneer to Alice Cooper's boa constrictor, Snake Oil is more than a tribute band, they're the full-on embodiment of a lifestyle, ferociously fun and irresistibly irrepressible.

With dozens of costume changes and a rotating cast, Snake Oil shows combine note-for-note musical authenticity, athletic choreography and more than a little comedy into a performance unlike any other. The band — Jiz on guitar and vocals, Roxxx and Hammer on bass and vocals, G-Spot on drums and Ryan Coke on bass — are a collection of hard-rock lifers who originally came together within Winnipeg, Canada's thriving live music scene. They're led by a chameleonic frontman known as Due, who transforms from one iconic rock star to another with nary a teased hair or pink bandanna out of place. His costumes are custom-designed replicas and his between-song banter comically spot-on in both accent and content. His Paul Stanley is so accurate he's been mistaken for the real thing.

Snake Oil is 100 percent committed to providing the ultimate live rock and roll experience. This is a band that literally guarantees a good time. Says Due, "If there's a group of people sitting there like sticks in the mud, we'll come offstage and we'll drag them into the show. We'll make sure they have fun."