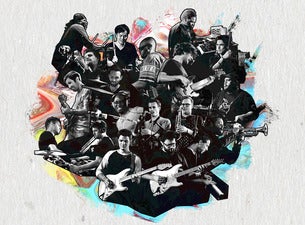 With a jazz-minded head and a jam-band heart, Snarky Puppy are the ultimate live act. A collective of 40-odd rotating members who typically play shows in groups of 10 to 20, they frequently play with guests ranging from David Crosby to Charlie Hunter to the Los Angeles Philharmonic. Led by bassist and composer Michael League, this rogues' gallery of instrumental misfits stir up all sorts of styles — rock, jazz, funk, R&B, Afrobeat, fusion and various world strains — into one big roiling pot of groove. Snarky Puppy have been playing together in various iterations since 2004, and live recordings of their countless club shows, festival stops and concert hall gigs are feverishly collected by fans with good reason. No two concerts are alike, thanks not only to an ever-shifting lineup but also to a healthy dose of improvisation. When they have the space to stretch out, Snarky Puppy can easily go a couple of hours onstage, playing songs from their 10-plus official albums plus plenty of imagination-infused, on-the-spot riffing.

Though Snarky Puppy are based in Brooklyn, Michael League founded the group in Denton, Texas, under ironic circumstances considering the group's runaway success. As a freshman jazz major at the University of North Texas in 2004, he wasn't good enough to place in any school ensembles. Starting his own band was a way to play the music he'd loved since his teenage years. And since then, Snarky Puppy have not only become a legendary live band, but won three Grammys: Best R&B Performance for their Lalah Hathaway–sung cover of "Something" (on 2013's Family Dinner, Vol. 1), and Best Contemporary Instrumental Album for both 2015's Sylva (with the Dutch Metropole Orkest) and 2016's Culcha Vulcha. The group's unwieldy roster happened by accident. In Snarky Puppy's early days, members couldn't afford to turn down gigs with bigger touring artists, so League would bring in pinch players, train them and put them on the road. But between the bonds formed and knowledge acquired, it seemed a waste to kick them out afterward. Hence, "The Fam," as they're called, grew and grew, from Snarky Puppy's self-released debut, 2005's Live at Uncommon Ground, through League's move to New York, and on to albums like 2019's Immigrance, which leans deeply into the members' multicultural backgrounds to arrive at a sound that's continually new and evolving.