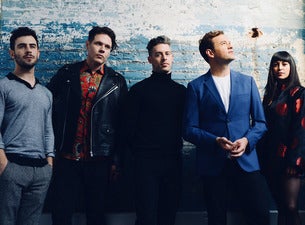 The cinematic, synth-drenched songs of St. Lucia are the perfect ode to '80s pop, chock-full of anthemic choruses and glittering guitar chimes. Holding it all together is frontman Jean-Philip Grobler's, whose classically trained voice perfectly evokes the nostalgia of the era on epic tracks like "Elevate" and "The Night Comes Again." Backed by an impressive group of musician's, Grobler thrilled fans at the band's 2013 shows, building excitement for their 2014 tour dates in support of Foster the People.

Born in South Africa and raised in Brooklyn, the multi-talented Jean-Philip Grobler began releasing music as St. Lucia in 2012 with a self-titled EP. Following praise from critics and bloggers, Grobler began building a band around the project for live performances, resulting in the lineup featured on the band's 2013 debut full-length When the Night. The album was a critical and commercial success, landing at No. 6 on Billboard's Heatseekers Albums chart and spawning the band's first tour. St. Lucia may be a young project, but their live shows already have a timeless quality, leaving fans with much to look forward to as the band continues to develop.

"St. Lucia live are absolutely excellent. Jean-Phillip's choir/professionally trained voice emanates throughout the room as he nails every note. The band is awesome, he's awesome, and the music's even better."

"Energy was high, the crowd was incredibly engaged, and St. Lucia filled the Bowery Ballroom with beautiful yet fun tropical dance tunes for a full 75 minutes!"

"St. Lucia puts on an amazing live performance. They engage with the crowd and in this case, the Brooklyn based band got a lot of excitement out of a New York audience."